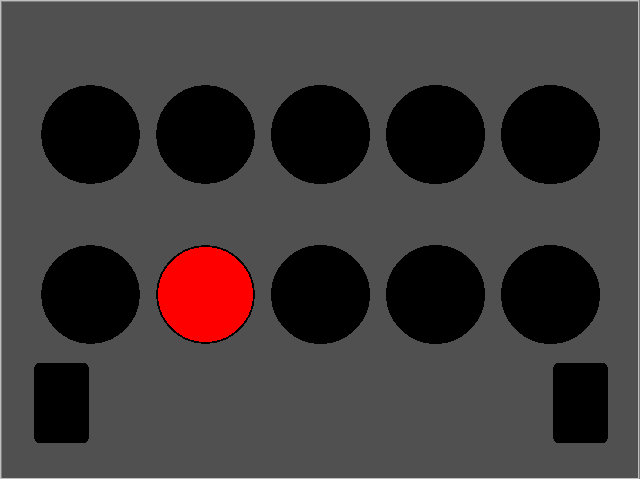 The DT is used to measure reactive stress tolerance and the associated ability to react. The test requires the respondent to use his cognitive skills to distinguish different colours and sounds, to memorise the relevant characteristics of stimulus configurations, response buttons and assignment rules, and to select the relevant responses according to the assignment rules laid down in the instructions and/or learned in the course of the test. The difficulty of the DT arises from the need to sustain continuous, rapid and varying responses to rapidly changing stimuli.

The respondent is presented with colour stimuli and acoustic signals. He/she reacts by pressing the appropriate buttons on the response panel. The stimuli are presented in three different ways: (1) in Adaptive Mode, in which the presentation speed adjusts to the respondentâ€™s performance level, (2) in Action Mode with no time limit and (3) in Reaction Mode with fixed time limit. The use of headphones ensures the exclusion of distracting noises.

For all test forms the internal consistencies for the main variables lie between r=0.98 and r=0.99.

An extreme-group validation carried out by Karner (2000) found significant differences in the Determination Test between drivers who had committed alcohol-related offences and the norm group. The test results of the drivers who had committed alcohol- related offences were significantly worse than those of the norm population. A study by Neuwirth and Dorfer (2000) showed that the Determination Test could distinguish between all the referral groups tested in the course of a traffic-psychological assessment (psychiatric and neurological clients, clients who had been involved in alcohol abuse) and the norm group. A study by Karner & Neuwirth (2000) showed significant correlations between the result of the DT and a driving test. The convergent validity of the test was demonstrated by Karner & Biehl (2000), who found that it correlated with the constructrelated RST3 test. Other studies carried out in the field of traffic psychology also confirm the validity of the test.

For the Forms S1 â€“ S6 representative norms are available that vary in size between N=102 and N=1179; some of the norms are also available separated according to age, gender and educational level. Special norms from among the following are also available for these forms: norms for drivers with conspicuous behaviour, Portuguese norm sample, Portuguese norms for drivers with conspicuous behaviour, norms of stroke patients, norms of German professional drivers.

Between 6 and 15 minutes (including instruction and practice phase), depending on test form.