6th International Trade Conference on the Monitoring of Commercial Traffic

Following the invitation by the Education and Training Institute of the Police of Lower Saxony (BIPNI) in Hannoversch Münden, Dr Herbert Helmle, Managing Director of AMTech GmbH was given the opportunity to discuss the possibilities and chances of pupillography in the monitoring of commercial traffic.

His conclusion was:
Pupillography is a suitable method to be used for educational purposes, in training and monitoring of drivers. The devices F2D and PSTxs are also suitable instruments for the screening of vigilance reduction as a consequence of sleep apnea syndrome within the framework of the Driving Licence Regulations (FeV Exhibit 4)

The police in Austria

checked drivers at the German/Austrian border in Suben for sleepiness with the PST.

The implementation of pupillography to survey truck and bus drivers is administered in the 2005-2010 traffic safety program of the federal state Oberösterreich (Austria).

about microsleep in collaboration with the SWR TV-station and Dr. Wilhelm of the STZ Biomedical Optics in Tübingen measuring a driver's sleepiness with the PSTxs II.

In 2 studies more than 320 car and truck drivers were examined at the roadside for sleepiness with the PST.

Concerened in this campaign were the TV magazine "Gesundheitsmagazin Praxis", (ZDF), the sleep lab Klingenmünster, the Instituteof forensic medicine in Homburg/Saar, the STZ Biomedical Optics in Tübingen, and AMTech GmbH.

Here are some pictures of the 24 hour measuring campaigns:

Drivers filling in the questionaire 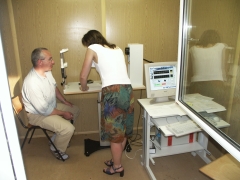 and while the examination with the PST. 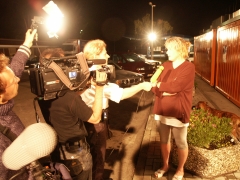 Afterwards some drivers are interviewed.

Dr. Wilhelm with the Steinbeiss-Transfer-Zentrum for Biomedical Optics in Tübingen evaluating the data.

About 25 % of the car drivers and 40% of the truck drivers were sleepy or very sleepy. In the 2. study, on a very hot day, the results were even worse.

Guiding a PC with your eyes

At the EXPO2000 in Hanover at the LAB.01 of DaimlerChrysler in Hall 2, everybody could have this experience. A modified PST made it possible.

Without a keyboard, with only a few auditive advices, one could choose the language (english or german) first and after clearing the screen with the sweep of his eyes the user selected between the four tasks: navigating, drawing, writing and viewing.

When navigating the image scrolls according to your viewing direction. Looking to the left shifts the image to the right and vice versa. A strong impression of depth ocurs because the periphery of the screen moves faster then the center. Looking to the center stops scrolling.

For writing one chooses from the four letters by looking at them for 3 seconds. The selected keys are ";pressed"; and the "typed" text appears in the center of the screen.

In the second task, drawing, the user has to follow a cursor. The eye movement is overlaid online. For most people surprisingly the performed eye movement is not a smooth curve. 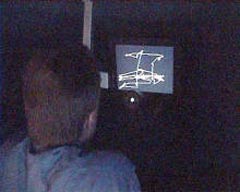 The fourth task, viewing, visualises the eye movements while observing a portrait. The fixated points are afterwards marked by the overlaid eye movement.