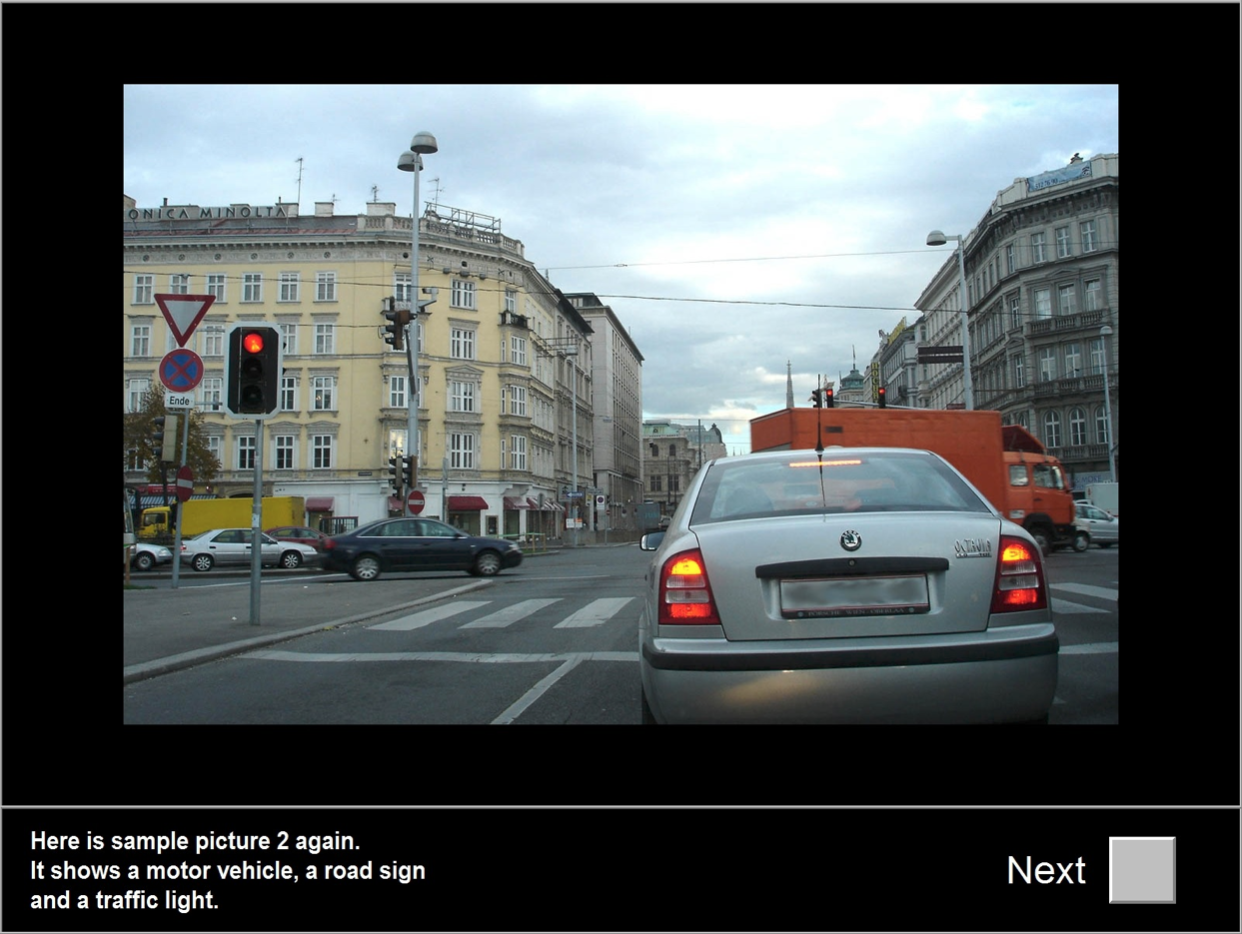 The ATAVT tests observational ability by briefly presenting pictures of traffic situations. The items are constructed according to explicit theory-led principles based on detailed analysis of the cognitive processes involved in working the test. The design of the ATAVT is based on the principles used in the wellestablished TAVTMB test but builds on these by taking account of recent research findings relating to the perception of scenes and objects. 84 items were drawn up and evaluated using the 1PL Rasch Model. The resulting item pool enables the test to be presented adaptively, with all the associated advantages that this brings.

The respondent is briefly shown pictures of traffic situations. After seeing each picture, he is asked to state what was in it, choosing from five answer options that are given. Items are presented adaptively - that is, after an initial phase the respondent is presented with items whose difficulty is increasingly tailored to match his ability.

There are two test forms: S1 for use in countries in which traffic drives on the right and S2 for countries that drive on the left.

The person parameter is reported, together with the corresponding percentile rank and T score.

Sommer et al. (2008) obtained a multiple correlation of R=0.90 between the difficulty parameters of the 1PL Rasch model and the design characteristics of the test items. This is usually interpreted as an indicator of the testâ€™s construct validity (Embretson, 1983). Evidence of criterion validity is provided by various studies of the prediction of global assessments of driving behaviour in standardized driving tests. For example, Sommer et al. (2004), using a test battery which included a precursor version of the ATAVT, obtained a classification rate of 74.7 % in the prediction of driving behavior. Risser et al. (2008) reported classification rates of 80.2 % and 86.5 %, with the precursor version of the ATAVT that they used contributing a relative relevance of 17.6 % and 5.8 %. The results obtained by Risser et al. (2008) were replicated in a study by Sommer et al. (2008). In addition, the authors demonstrated the incremental validity of the ATAVT alongside ability tests and driving-related personality traits. Evidence of the ATAVTâ€™s validity has also been obtained in the field of rail transport (RSSB, 2010). In a sample of 135 train drivers and trainee train drivers, ATAVT correlated significantly with the assessment of operating safety systems in locomotives (r=0.288) and the assessment of performance in the execution of procedures (r=0.324).

The program automatically checks the graphics output speed and issues a warning if the requirements are not met. This can be tested before purchase simply by installing the Demo version.